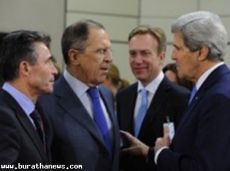 Russian Foreign Minister Sergey Lavrov discussed with his US counterpart John Kerry the situation in Syria and preparations for Geneva 2 conference as well as the elimination process of the chemical weapon in Syria.

A Russian-US meeting in the presence of the UN envoy to Syria Lakhdar Brahimi will be held on December 20 to discuss issues related to the international conference on Syria due in Geneva on January 22. Earlier, Lavrov, expressed hope that the NATO adheres to the principles of the international law after it realized the danger of the situation in Syria.

At a press conference held in Brussels after Russia-NATO Council meeting, Lavrov said "We held talks and discussed an agreement on the chemical weapons of Syria and the Iranian nuclear program."

"The statement signed today on Syria's chemical weapons is a support to the UN resolution in this regard, and we welcome it, " Lavrov added.

For his part, NATO Secretary-General Anders Fogh Rasmussen said in a press conference that the only solution to the crisis in Syria is through an inter-Syrian dialogue based on Geneva Communique issued in June, 2012.

He added that holding Geneva 2 next January was also discussed during the meeting of Russia-NATO Council.

Rasmussen hailed the work achieved so far regarding destroying the chemical weapons of Syria, calling on all parties to cooperate completely with the UN mission and the Chemical Weapons Convention (CWC) until all materials and equipment are destroyed in a safe way.

On a relevant note, a statement was issued on the level of the foreign minister following the Russia-NATO Council meeting, in which Russia and the NATO voiced readiness to provide extra help to the joint UN-OPCW mission operating in Syria.

For his part, the Special representative of the Russian President, Deputy Foreign Minister Michael Bogdanov discussed with Syria Ambassador in Moscow Riad Haddad the steps being carried out by Russia to prepare for the international conference on Syria.

"The talks dealt with the steps taken by Russia during communications with regional, international partners as well as representatives of the Syrian opposition to hold Geneva 2 conference," a statement by the Russian foreign Ministry said.

The Russian Foreign Ministry announced that Lavrov discussed last night with head of the Saudi intelligence Bandar Bin Sultan the prospects of the international Geneva 2 conference due to be held on Syria and the Iranian nuclear program.

The Ministry noted in a statement on Wednesday that both sides discussed in detail the main issues regarding the developments in the Near East and Middle East, including the crisis in Syria and Geneva 2 conference as well as Iran's nuclear program.

The statement pointed out that focus during the talks between Lavrov and the Saudi official was laid on the necessity to solve the acute regional issues on the basis of respecting the rules of the UN Charter and the international law principles.

Discussions, the statement added, also dealt with the prospects of the Russian-Saudi relations, with reference made to the importance of continuing bilateral political dialogue and activating trade and economic relations.

Russian President's spokesman Dmitry Peskov announced that President Vladimir Putin met yesterday Bin Sultan and discussed with him the situation in Syria in the framework of the preparations for Geneva 2 conference.

Al Saud authorities is considered the first supporter of terrorist groups in Syria and the top supplier of weapons, funds and terrorists.

The Russian Foreign Ministry's commissioner for human rights, democracy, and rule of law, Konstantin Dolgov, reiterated Russia's call for releasing the nuns who were kidnapped by an armed terrorist group in Maaloula town in Damascus countryside.

Russian ITAR-TASS news agency quoted Dologov as saying that "We call on those who kidnapped the nuns to safely release them immediately" He also called for openly condemning this act.

The Russian Foreign Ministry called Tuesday for stopping the terrorist groups' attacks targeting places of worship and religious figures in Syria, asserting the need to prepare a suitable atmosphere for holding the international conference on Syria "Geneva 2 ".

The latest of such attacks took place in in Maaloula town in Damascus Countryside, as an armed terrorist group attacked St. Thecla Convent and kidnapped Mother Superior and a number of nuns.

In a statement, the Ministry said that an IL-76 Russian airplane loaded with 25 tons of humanitarian aid has landed in Lattakia, adding that these processes are made in cooperation with the Syrian authorities