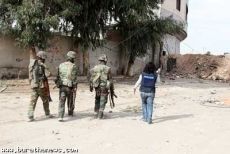 The Syrian Arab army on Saturday resumed its national duty in hunting the armed terrorist groups in different Syrian cities, killing many terrorists and storming hideouts of several others.

Dens of terrorist groups, including of leaders, destroyed in Idleb

Units of the armed forces killed 10 terrorists in a special operation that targeted their den in Nahliya village in Ariha in the countryside of Aleppo.

A military source told SANA that the operation resulted in the destruction of a number of the terrorists' cars containing weapons and ammunition.

Other terrorists' dens and gatherings were destroyed in the villages of Zarzour and al-Janoudiyeh in Jisr al-Shughour. Numbers of the terrorists were killed, according to the source.

The source added that an army unit destroyed a weapons and ammunition cache and a den of leaders of armed terrorist groups in Abo al-Duhour area.

Units of the army confiscated boats loaded with weapons, munitions in al-Rastan lake, storming dens of terrorists in many neighborhoods and towns in Homs.

A military source told SANA that the army completely eliminated members of armed terrorists groups in al-Zara, al-Houla, foiling an attempt of terrorists to infiltrate into al-Ghasibiya village.

The source added that an army unit killed a number of terrorists while trying to attack a military check point in Asmad town in al-Mukharam.

Meanwhile, another army unit clashed with terrorists who were driving boats in al-Rastan lake while trying to reach al-Houla area, killing the terrorists onboard and confiscating their weapons.

A military source told SANA that an army unit killed terrorist Alaa Masoud, the leader of the so-called 'Saifullah al-Masloul Battalion' and 7 members of his terrorist group in Mansheit Khan al-Sheih in Damascus Countryside.