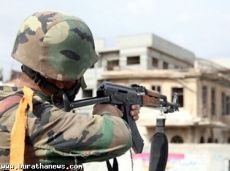 The Syrian army on Saturday resumed its national duty in pursuing the armed terrorist groups, carrying out a number of military operations against the terrorists, eliminating their hideouts and weapons.

A military source said that terrorists' dens were destroyed with all weapons and ammunition inside to the east of Deir-Attiyeh and to the northeast of al-Nabek and to the south of Qara in al-Qalamoun area in Damascus Countryside province, adding that the terrorists Mohammad al-Boushi, Ibrahim al-Mahini and Zyadeh al-Sharara were killed.

An army unit killed members of armed terrorist groups in Mahin town in Homs countryside, as other army units killed many terrorists in al-Warsheh, Bab al-Sebaa and Jurat al-Shayah neighborhoods in Homs city, in addition to killing more others in the villages of Kafar Laha, Aqrab and al-Khalediyeh.

Jabhat al-Nusra terrorists' dens were destroyed on Nawa-Tseel road in Daraa countryside, with all the terrorists inside of them killed, including Bashir al-Ghali and Abdul-Salam Mahmoud al-Qarfan.

A military source told SANA that units of the army destroyed hideouts of terrorists in Kfar kata, Maar Tamsreen in Idleb countryside.