Foreign Ministry: Kerry's presentation is based on old stories published by terrorists 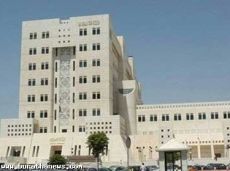 An official source at the Foreign and Expatriates Ministry said that after days of media exaggeration about what the US administration described as decisive evidence, US Secretary of State John Kerry only produced material based on old stories which were published by terrorists over a week ago and are full of fabrication and lies.

The source said that the Ministry is surprised that one of the bigger countries in the world is attempting to deceive its public opinion in such a naïve manner by relying on non-evidence, and that the Ministry denounces the US act of basing its positions on war and peace on what was published on social networking sites, which the Ministry views as a desperate attempt to talk the world into accepting the upcoming US aggression.

The source said that the numbers quoted by Kerry are fictional and produced by armed groups in Syria and the opposition abroad, both of whom instigate the US aggression, adding that this scene brings to mind the lies promoted by Colin Powell before the invasion of Iraq.

The Source said that Foreign and Expatriates Ministry confirms that all the accusations leveled by Kerry against the Syrian state are lies and devoid for truth for the following reasons:

1-Syria has challenged the US to produce one piece of true and logical evidence that it used the alleged chemical weapons, and Kerry relied on fabricated images from the internet, and the alleged call made by a Syrian officer after the alleged attack is too ridiculous to be discussed.

2-Syria never impeded or restricted the international investigation committee, on the contrary; as the UN Secretary-General has lauded the Syrian cooperation with the committee in his most recent call with the Foreign and Expatriates Minister on 30/8/2013, asserting that Syria permitted the committee to move exactly as per the agreement signed by the two sides.

4-The Syrian government affirms that Kerry's allegations that the Syrian Army knew about chemical weapons use three days prior to the incident are lies, as proven by the fact that Syria requested the investigation committee to visit al-Baharia area where Syrian Army soldiers were exposed to toxic gas, and the committee met the affected soldiers in the hospital.

5-If the aggression on Syria, as Kerry claims, intends to halt the use of chemical weapons, we would like to remind Kerry and the United States that Syria was the first to propose a draft resolution at the Security Council to make the Middle East free of all forms of weapons of mass destruction, and that the United States was the one who prevented the draft resolution from being passed.

6-Regrarding Kerry's hints which he made to bypass the Security Council under the pretext that the investigation committee isn't responsible for determining who used chemical weapons and that it's task is only to verify that such weapons were used or not, the Foreign and Expatriates Ministry would like to affirm that the committee's tasks were deiced upon by the Security Council, and that the US had pressured the committee to make its authority this limited, something which Kerry, being State Secretary, certainly knows.

The source said that the Foreign and Expatriates Ministry, while appreciating Kerry's concern over the Syrian people's security, affirms that this pretext has become exposed to everyone, and that under the pretext of defending the Syrian people, the US is paving the way for an aggression against this very people, an aggression which will claim hundreds of innocent victims whose blood will be on the hands of the United States and those who join it in this aggression morally, politically or effectively.

The source concluded by saying that this unilateral behavior only serves the political interests of the United States, not the interests of its people, and that it throws aside all international law and blatantly violates international legitimacy and the UN charter.

Syria rejects any incomplete report by the UN General Secretariat before the UN experts wrap up missions and have the results of laboratory tests of gathered samples checked, and conduct investigations at sites where the Syrian soldiers had been exposed to toxic gases, Deputy Prime Minister, Foreign and Expatriates Minister Walid al-Moallem said.

Al-Moallem was speaking during phone call on Friday with the UN Secretary-General Ban Ki-moon that focused on the work of the UN mission investigating an alleged chemical weapons' use.

The UN Secretary-General thanked Syria for its full cooperation with the mission, saying the UN Secretariat is in the process of evaluating the results of mission's work and submitting its findings to international accredited labs.

Al-Moallem inquired about the motives behind having the experts withdrawn from Damascus before completing their mission. ''They will return to complete their mission,'' Ki-moon replied.

Syria expects the UN Secretary-General to maintain objectivity and rebuff pressure, and play his role in preserving world security and peace, al-Moallem said, adding Syria throws its weight behind his efforts to convene Geneva conference as it considers a political solution an exit route from the current situation.

''Any aggression on Syria would wreck efforts for finding a political solution, al-Moallem pointed out.