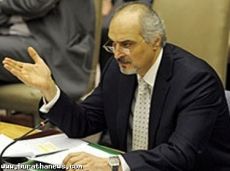 Syria's Permanent Representative to the UN, Dr. Bashar al-Jaafari, said the Syrian government continues to perform its constitutional duty in protecting the Syrian citizens from terrorism and vandalism acts to bring back security and stability.

Delivering Syria's statement before the UN Security Council's open session on Tuesday, al-Jaafari said that the care for the Syrian civilians is inconsistent with the policies of certain Arab, regional and Western countries who boast about offering weapons, training and safe haven for the armed terrorist groups who target the Syrian state in all its components.

''I'd like to thank all the good-intentioned who touched upon the crisis in Syria and proposed positive ideas such as saving the Syrian citizens from the effects of the crisis, '' al-Jaafari said.

''As for those who approached the crisis in my country with criticism, theorization and leveling accusations, I'd like to stress that their governments are part of stoking the crisis in Syria, be it through imposing compulsory measures, allowing the travel of extremist nationals and terrorists to Syria, allowing them to cross into Syria from neighboring countries, or arming, funding and sponsoring those terrorists and promoting them in the media,'' he said.

''The most appropriate way to save civilians the woes of armed conflicts is through preventing the outbreak of armed conflicts, and adopting peaceful measures to settle the ongoing ones, and bringing to account the governments who have incited them," said al-Jaafari, citing the Libyan example in this regard.

He added that protecting civilians in armed conflicts is not possible unless under full respect to the international law and the UN Charter, namely respecting sovereignty of states, equality among countries, and non-interference in the internal affairs of states.

''It is not acceptable that this significant issue be dealt with in a selective way that makes it empty of meaning and a loose concept that can be abused and misused in several ways,'' al-Jaafari added.

He added that one of the sovereignty's top principles is that the state is exclusively and primarily responsible for protecting civilians, which is a basic rule of the international law.

Al-Jaafari pointed out that ''As proven by practical experience, the issue of protecting civilians in the armed conflicts have turned into an excuse for serving suspicious agendas and the interests of some countries who seek to stoke and utilize tensions, in a way that drifted far from the simplest rules of the international human rights law and the international humanitarian law.''

Al-Jaafari went on to say that ''We are witnessing frantic attempts to undermine the sacredness of sovereignty as stated in the charter intended for marketing political propositions that are yet to gain international agreement, such as the so-called 'the responsibility for protection' and 'humanitarian intervention' ", clarifying that these propositions are promoted for creating public opinion that accepts NATO military intervention in the affairs of developing countries and regime change there.

He stressed that dealing with the issue of protecting civilians during armed conflicts should be based on encouraging peaceful settlement to conflicts and condemning and holding accountable the countries that support terrorism and violence.

Al-Jaafari added that protecting civilians necessitates not exposing them to suffering and slow death by depriving them of their daily life requirements as food, medicine and fuel because of unilateral unjust sanctions imposed by some countries.

He reiterated Syria's stance on the necessity of protecting the civilians under the Israeli occupation in the occupied Arab lands, including the occupied Golan.

Syria's Representative stressed that the keenness on the Syrian civilians doesn't go along the policies of some Arab, regional and international countries which are publically bragging of providing training, shelter, money and weapons to the across-border terrorist groups which are targeting the Syrian state and using civilians as human shields and residential areas as platforms for their terrorist acts.

"Concerns over the Syrian civilians should be expressed through sponsoring terrorism and extremism or exerting pressures to foil the national dialogue, which will enable the Syrians to restore security and stability and determine their future," al-Jaafari said.

Al-Jaafari stressed that there is difference between protecting civilians and protecting gunmen, extremists and terrorists, adding that the Syrian government will continue to carry out its constitutional duties in protecting its citizens from terrorism and meeting their needs, and restoring security and stability despite the unilateral and unjust procedures and despite the great pressures to meet the citizens' needs.

He noted that the Syrian government has provided all facilitations to the UN organizations, adding that "Holding media conferences here and there to announce pledges that are not met most of the time is considered inconsistence with the effort of protecting civilians, especially when many countries which announced to provide aid are a primary reason behind the suffering of the displaced people."

"The arrogance of the Israeli representative made him think that his country's hostile policies and occupation of the Arab lands should be a model for the member states of this organization to follow," al-Jaafari said, adding "Israel is helping, sponsoring and arming a takfiri salafi group in the occupied Syrian Golan. Therefore, Israel is part of the current crisis in Syria."