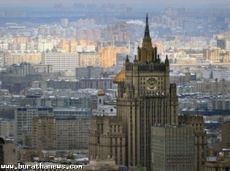 The Russian Foreign Ministry stressed that Geneva statement is still needed as an irreplaceable basis for solving the crisis in Syria.

In a statement published on RT website on Saturday, the foreign ministry said ''This document that was agreed upon unanimously is still needed as an irreplaceable basis for solving the crisis in Syria, adding '' We are convinced that the priority is for halting all forms of violence and offering humanitarian aid to the Syrians, including the refugees and displaced.''

''The Russian side has responded to the initiative for continuing consultations in this regard as Russia is inclined to the goal of achieving political settlement in Syria on the basis that all parties implement Geneva statement,'' said the statement, adding ''In parallel, a process of political transition should be launched that aims to guarantee equal rights for all sects in Syria on the legislative level.''

''We still insist that the Syrians should decide their own future away from foreign meddling and the imposition of ready-made recipes,'' the statement said, adding that ''Key outside players should offer the maximum support possible for that end according to the international law and the UN Charter.''

The statement indicated that the Russian side has expressed unswerving support to the mission of the UN envoy to Syria, Lakhdar Brahimi.