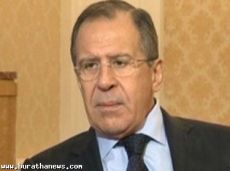 Russia on Friday reiterated its call upon the Syrian parties and external players to abide by the Geneva Declaration for resolving the crisis in Syria.

The Russian Foreign Ministry issued a statement on its website following a phone call between Foreign Minister, Sergei Lavrov, and the UN Envoy to Syria, Lakhdar Brahimi, saying Lavrov focused in its work with the Syrian parties on the need for applying the items of the final declaration of the ministerial meeting held in Geneva on the 30th of last June.

The Ministry's statement added that Lavrov stressed that the Geneva Declaration is "irreplaceable to allow finding an exit from the stumbling situation and halting the violence and the use of force and starting a Syrian national dialogue on the reforms in the country that serve the interest of all the Syrians."

"Lavrov also noted that it is necessary not only for the Syrian parties but also for the main external players to abide by the agreements that resulted from the aforementioned meeting," said the statement.

It pointed out that Brahimi stressed to Lavrov his readiness to continue communication with the Russian side on the crisis in Syria.

In another context, Lavrov expressed surprise at the logic of the Western countries in dealing with the crisis in Syria, saying that "They supply gunmen with money and arms, then they hold the authorities responsible if chemical weapons fall in the hands of the gunmen."

Lavrov said in an exclusive interview with Russia Today TV channel on Thursday that Damascus has given assurances that it will not use chemical weapons under any circumstances.

He added that "I don't think that Syria will resort to use chemical weapons," indicating that "it is not the first time that we hear rumors of which we make sure of them many times before we sought clarity from the Syrian government which, in turn, strongly affirms that this will not happen whatever the circumstances are."

Lavrov said "Our western friends said that the whole responsibility lies with the Syrian government if these weapons fell in the hands of the gunmen. It is weird that such thing came out from those who encourage gunmen to reject dialogue and continue fighting and provide them with arms, money and political and moral support."