Iran, Russia and China Stress on Peaceful Solution in Syria 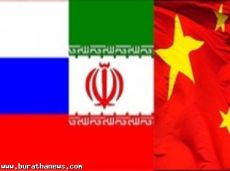 Chinese, Iranian and Russian officials stressed the necessity of solving the crisis in Syria by peaceful means and without foreign interference in the Syrian affairs. Iran's Foreign Minister, Ali Akbar Salehi, reiterated his country's stance on the necessity of immediately replacing the logic of violence with the logic of dialogue in order to solve the crisis in Syria.

Meeting members of Central Foundation and Consultation Body of the International Scientific Experts Assembly with the participation of Syria, Salehi indicated that Iran has taken serious procedures in this regard, the latest of which was holding the Syrian National Dialogue Conference in Tehran under the title " No to Violence, Yes to Democracy".

He criticized the double standards policy adopted by the west towards the countries in the region, citing the development of events in Syria and Bahrain as an example of this policy in terms of human rights with the popular peaceful protests in Bahrain are being ignored.

Salehi added that when no wide popular protests went out to the streets in Syria, particularly in Damascus, the western countries sent gunmen to Syria and supplied them with money and arms to destroy the infrastructure of the Syrian state in violation of the international laws and conventions.

He stressed the need for following up on fulfilling popular demands and carrying out reforms in Syria, adding that Iran has announced many times that reforms and popular demands should be carried out in a calm atmosphere and by the Syrian people.

Meanwhile, Iranian Assistant Foreign Minister for Asia and the Pacific Affairs, Abbas Araghchi, said that he and the Chinese Foreign Minister, Yang Jiechi, stressed during a meeting in Beijing on Thursday on the need for reaching a peaceful settlement and solution to the crisis in Syria without any foreign interference.

The talks were held in the framework of the 11th meeting of the Political Consultative Committee held between Iran and China, during which, Aragchi said, both sides shared identical stances towards the regional issues.

"We and the Chinese friends see that any change in Syria should be according to the will of the Syrian people and based on the national dialogue discussions among all the Syrian parties," the Iranian official added.

He stressed that the Syrians are the ones who should decide their destiny and that visions or decisions should not be imposed on them from abroad.

Araghchi said that during his talks with the Chinese Foreign Minister stress was placed on the necessity for halting the violence immediately and stopping the sending of weapons and money from abroad to the various terrorist groups in Syria.

In another context, Head of the Iranian-Russian Parliamentary Friendship Committee at Iran's Shura Council, Mehdi Sanai, said the crisis in Syria should be solved through the Syrian political groups with the participation of the Syrian government.

During his meeting in Moscow on Wednesday with Deputy President of the Russian Duma, Nikolai Levichev, Sanai affirmed that dialogue is the only way to solve the crisis and reach a mechanism that is fair for all the parties.

For his part, Levichev emphasized Russia' firm stance towards Syria, stressing that the Syrian parties can solve the issues of their country and that the interference of the US and other countries causes the crisis to aggravate.