Lavrov: Russia will Push for adopting Geneva Agreement on Syria at the UNSC 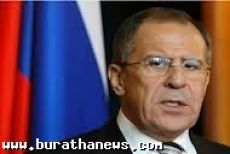 Russian Foreign Minister Sergey Lavrov on Saturday underlined his country's intent to push for adopting Geneva agreement on the crisis in Syria at the forthcoming meeting of the UN Security council later this month.

"We affirmed to the US Secretary of State Hillary Clinton that we will call on the Security Council to adopt Geneva agreement," RIA NOVOSTI quoted Lavrov as saying to reporters in the Russian city of Vladivostok which hosts Asia-Pacific Economic Cooperation summit.

"The unilateral sanctions imposed by the US on Syria and Iran surpassed their regional borders from a natural perspective, they directly impact the Russian interests, particularly the banks," Lavrov said, adding that Russia has never supported any of the sanctions against Syria as they would achieve nothing.

He underlined that Russia at the same time backs a conference that will be convened by Syrian opposition groups later this month.