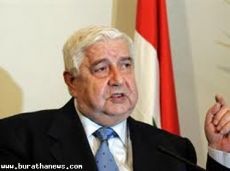 Deputy Prime Minister, Foreign and Expatriates Minister Walid al-Moallem stressed Syria's cooperation with the International Committee for the Red Cross (ICRC) to make its humanitarian operations in Syria a success, expressing appreciation for its mission.

Meeting Head of the ICRC Peter Maurer on Wednesday, Minister al-Moallem explained the negative humanitarian effect of the unjust sanctions imposed on the Syrian people which target their livelihood and hinder the conveying humanitarian aid to the Syria.

Miniter al-Moallem reminded Maurer that he has to benefit from the position of the ICRC to prevent concerned countries, particularly Syria's neighboring countries, from funding, arming and harboring terrorist groups since they are responsible for shedding the Syrian blood.

For his part, Maurer welcomed Syria's determination to speed up procedures related to committee's work and provide all facilitations to make its mission a success.

Maurer stressed his efforts to coordinate with the Syrian authorities and the Syrian Arab Red Crescent regarding the humanitarian operations, hailing the efforts exerted by the Syrian volunteers despite the difficult circumstances.

The meeting reviewed the ICRC's humanitarian operations in Syria.

In the same context, Minister of Health, Saad al-Nayef reviewed with Maurer the situation of the health sector in Syria and the damage it has been exposed to, in addition to cooperation mechanisms between the two sides to provide pharmaceutical and medical supplies and cope with the growing health needs.

Dr. al-Nayef clarified the Ministry's readiness to cooperate with the ICRC and other international organizations and NGOs provided that they work fully objectively, stressing that the Ministry works on providing all medical services for free to all the injured and patients with complete transparency and neutrality through its hospitals and medical centers.

The Minister indicated to the great damage caused to the health sector due to the continuous attacks, adding that since the ICRC delegation's last visit three months ago , 20 doctors, nurses and technicians were martyred while carrying out their humanitarian duties, as ten others were injured and seven were kidnapped.

Dr. al-Nayef clarified that armed terrorist groups attacked 14 hospitals and 72 medical centers and stole and destroyed 73 ambulances, increasing the total number of the targeted health vehicles and institutions since the beginning of the events to 38 hospitals, 156 medical center and 272 ambulances.

The Minister of Health pointed out that the number of the health sector martyrs reached 42 in addition to 52 injured workers and to 13 others who were kidnapped.

The Minister called Head of ICRC to pay field visits to the national hospitals in all provinces and inspect the situation of medical services provided and the damage caused to them so that to assess their needs.

Al-Nayef pointed out that the Ministry has lately worked to expand and boost its services through establishing mobile medical clinics in cooperation with NGOs.

For his part, Maurer, stressed that the ICRC abides by neutrality and independency in its work, particularly in the health issue, expressing concern over the damage to the health sector in Syria and the disrespect of health utilities, relief systems and the staffs.

He pointed out that the ICRC will exert efforts to support the health sector in Syria, which is the top priority of its work in the country, stressing the importance of delivering aid to all parts of the country.

Maurer expressed desire that the ICRC could establish clinics and institutions to provide medical services to the Syrians, considering that persuading all parties that providing the Syrian citizens with medicine, water and food is a mutual interest.

Head of Syrian Arab Red Crescent ( SARC), Abdulrahman al-Attar expressed the organization's readiness to fully support the health sector, particularly in delivering aid to insecure areas where the Ministry may not be able to reach, pointing out that the SARC HAS established ten medical points in Muaddamyyeh, Harasta and Qaboun, in addition to its efforts to establish others in al-Dumeir and al-Kesweh.