Saudi Arabia: in a restless realm 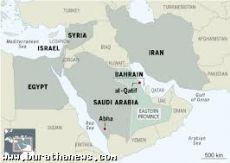 High tension: Eastern Province protests have been fuelled by events such as the arrest of Shia cleric Nimr al-Nimr

Saudi Arabia’s absolute monarchy watched the demise of its close ally, President Hosni Mubarak, with alarm. The Al Sauds had sought to avoid this dramatic moment of change in the Arab world, even pleading with their American friends to save the Egyptian despot’s regime.