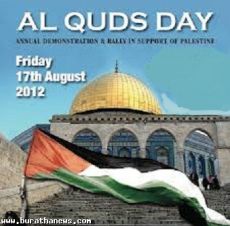 Al Quds literally translates to “The Holy”, and is also known by the name Jerusalem. It houses one of the holiest mosques of the Islamic faith, and is a religious symbol for Judaism and Christianity as well as Islam.

In Judaism, the city is believed to have been established by the King David as the capital of Israel in his time. For Christians, this city is where Jesus Christ was crucified. And for Muslims, the city represents the first Qibla, direction towards which the Muslims pray, and is named Awal al Qiblatayn. The Prophet of Islam Muhammad (pbuh) on his Night Journey (al-Miraj) went on a spiritual and physical ascension before his migration to Medina, and he was taken from Makka to Jerusalem, then up to the heavens by the will of the Almighty.

The Holy Quran narrates “Glory to (Allah) Who did take His servant for a Journey by night from the Sacred Mosque to the farthest Mosque, whose precincts We did bless,- in order that We might show him some of Our Signs: for He is the One Who heareth and seeth (all things).” Chapter 17 (Al-Isra) verse 1.

The city is home to many religiously significant sites including: the Temple Mount, the Western Wall, the Church of the Holy Sepulchre, the Dome of the Rock, and Al-Aqsa Mosque.

Palestinians are the natives of this region. They are descended from most of the previous inhabitants of this country. For over 60 years, Palestine has been under attack from Israeli nationalists (Zionists) who have been trying to take over the land and snatch it from the Palestinian people. Already they have illegally sieged a lot of their land, occupying West Bank and Gaza.

After a short period of time, it seemed that the voices of the Palestinians were becoming hushed, no one was listening to their cries for help any more. Until in 1979, the year of the Iranian revolution, Imam Khomeini revived the remembrance of Al-Quds, the usurped land and announced that every year, the last Friday of the Holy month of Ramadhan (the month in which Muslims fast from dawn till dusk) will be dedicated to a protest against the oppressive Zionist regime that is stripping the Palestinian people of their homeland.

After Imam Khomeini's demise, his successor Imam Khamanei, the present Supreme Leader of the Islamic Republic of Iran, continued the remembrance of this day and its dedication to the freedom of Palestine, and year upon year protests fill the streets of Iran for this cause.

Significance of this remembrance

The demonstrations that mark the stand of the humanitarian people against the illegal state of Israel is significantly important for the awakening and the revival of the Islamic community. It brings Muslims and non-Muslims alike together to protest a common interest and attracts many people across the globe. This is a stand which represents equality, respect, justice and honour and is shared between Muslims and non-Muslims. It breaks unnecessary barriers and brings people together hand in hand, including pious Jews who also denounce the Zionist regime and creates a sacred unity of truth against falsehood.

The issue of Al-Quds is bigger than all of us. It stands for the fight against oppression and tyranny. Against foreign occupation and usurpation. But most importantly it stand for the freedom of humanity.

The Common Word of Truth Movement