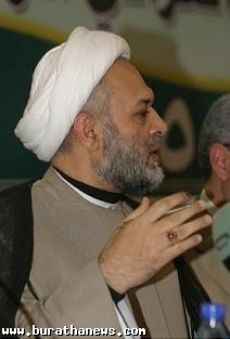 His Eminence Sheikh Jalal Aldeen Al-Sagheer, Imam Buratha mosque said during Friday prayer, that The leader of Jund Al-Samaa terrorist group was former Saddam intelligence member and his name was Thiya Kazem Al-Karawei. During Saddam era, was sended to prison under special arrangements and placed between simple Shia prisoners to fool them as a holy man.

He established close relations with them and started telling them what is going to happen to them in future. He told some when will be released or executed or who his sentence will be reduced with right prediction because it was already coordinated with prison authorities. Prisoners started to trust him more and consider him as a holly man.

Following the collapse of Saddam regime, his planed role started and began to create his own militia and promote himself as a direct son of Ali Ibn Abi Taleb. He managed to stock large quantities of advanced weapons and ammunitions in his camp in Orchards area in Al-Zerga. Their plan was to take over and control Najaf city plus killing all religious Shia scholars with hands of ignorant Shia.

Sheikh Al-Sagheer said that This groups had strong links with Al-Qaeda terrorist group . He reminded the audience the media releast og Bin Laden And Althawaheri when they stated that we will soon see the battle to be raging among Shia.

This military operation against Jund Al-Samaa is considered as an evidence to prove the government of Al-Maleki is not sectarian as portrayed by Arabic media .