Extensive crack down campaign on terrorist Jund Al-Samaa near Najaf 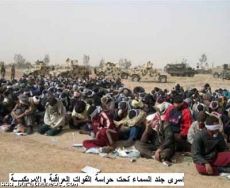 Informed source in Najaf govern ate office, said today that a campaign is started to chase the remnants of the Jund Al_Samaa in Najaf.

The source added “security forces chasing the terrorists in the Najaf cemetery and Bahr Al-Najaf”. Added, Security forces engaged in negotiation with them through mediators to surrender peacefully or face the consequences.

The security forces in Najaf launched yesterday, massive campaign to arrest those suspected of having links with terrorist Jund Al-Samaa group. Also a night curfews were imposed for indefinite period in the province for both vehicles and pedestrians as precaution measures to prevent any terrorist’s activities.