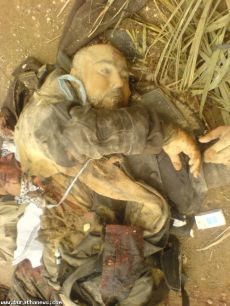 An informed source said that the investigation are underway with members of a “Soldiers of Heaven” revealed that this group have cells in Najaf province and other main cities. This source said in phone call to Nahrainnet site that the investigations also revealed that this group wasn’t a simple organization with perverted idea but disciplined and strictly regulated armed cells. It has great potentials and capabilities which cannot be provided without financial and logistical support from governments and large organization.

The source emphasis that there are strong evidence confirming this organization has links and cooperation with other terrorists groups with signs of involvement of Saudi Arabia providing financial and logistic support from the initial investigation with detainees and documents seized in their base in Zargah orchards.

Government spokesman Dr Al-Dabagh revealed in press conference today, involvement of neighbouring country not mentioned by name in providing financial and logistical support to the group “Soldiers of Heaven”.

This statement confirmed our report published on 28th Jan 2007, which revealed the Saudi involvement in support this group.

Dr Al-Dabagh said that the group had intended to launch a terrorist attack on the 28th Jan, but the security authorities decided to surprise them on 27th before 24 hours of their planned time thanks to accurate intelligence.

On the other hand , a well informed source of “Nahrain Net” revealed the involvement of other statein the support  and assign of “Jund Al Samaa”, pointing out that there is preliminary information which need to be examined closely and carefully refers to the involvement of British intelligence services agents active in Iraq. The source said that is not rely solely on finding a British passport because it could be forged one but the available information from the investigation and documents found force the police to examine the matter more carefully to confirm the existence of the relationship between British agents and both  this group and intelligences agencies of neighbouring Arab countries.

The informed source explained that the participation of two British aircraft in bombing the complex of this  group as a proactive measure to camouflage  and refute and information may revealed latter by investigation of involvement of British agents in supporting this armed group . The fact that this confrontation did not need the participation of British warplanes because the American forces ensured and provided air support of the ongoing military operations in the area plus they lost a helicopter which made them use warplanes also in addition to the  support.